« Availability, an attitude as a working method » 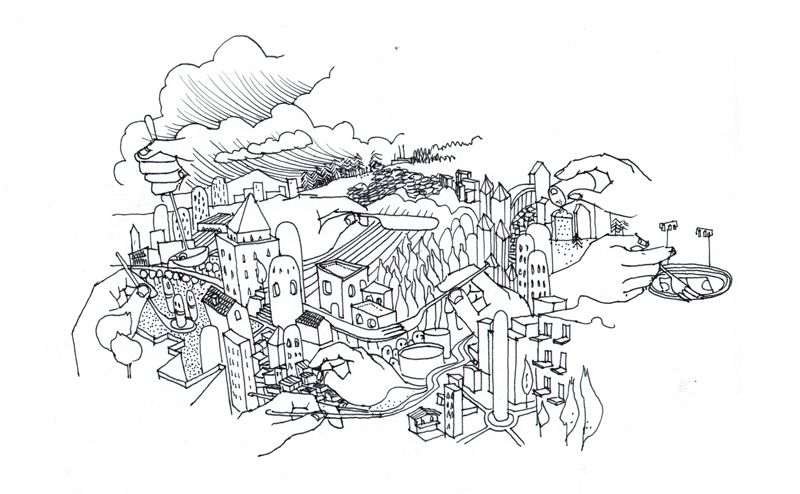 Collectif Etc is a team of architects, urban planners and graphic designers, implementing urban situations where inhabitants are involved in designing and managing their environment. We carry out different types of projects but we’ve tried in this essay to consider our approach accordingly to a single perspective.

We are starting from an attitude, a state of mind: availability. This term refers to someone that is opened to others and that has time and help to give. Then what if availability becomes a way of working, a professional approach for urban planning? How can availability describe a method to transform a semi-private wasteland into a place of sociability? Or how can it designate a way to carry out an urban study for re-vitalizing a village? Or finally how can it be an approach for helping empowerment and community organizing?

This essay is going to show three ways we consider availability, based on three case studies. First we are going to talk about how we tried to make a space available to social exchange and public uses in a suburb of Brussels. Secondly, how we tried to make our time available to people in a village in Auvergne region. In a third part, we‘ll explain how a situation which gathers available know-hows can participate to social empowerment in a district of Bordeaux.

Considering a public space, we are thinking firstly about the basics, in terms of uses and practical matters. We are trying to stimulate people to simply occupy it, to use it as playground, to eat good meals on it, to rest, to talk to other people, etc. With our tools, we want to stimulate the space we identify and the people that are related to it. In order to ensure this, we are not only dealing with physical transformation but also on the uses and on the mental representation people have regarding this place. We are considering a building site as an opportunity to organize an intense moment of celebration involving inhabitants.

La PlaineX70 was a project we did in Brussels, collaborating with the artists Ost collective and the landscape gardener Tiphaine Hameau. We were invited by the festival Parkdesign, organized by the town hall, in order to transform and enhance an urban wasteland in the Anderlecht suburb. The site was officially public but it was almost semi-private in terms of uses. Indeed, the plot was isolated from the street by fences which the keys belonged to the inhabitants of the social housings in the block and to a nearby house of associations. The idea was to meet these privileged users and transform the left-behind space together in order to make a place of sociability for the neighborhood. The project was divided into three phases of one or two weeks each, during five months. Each phase represented a new step on revealing the capacities of the space and the mental image people would have of it.

The first phase consisted in meeting the inhabitants and making the 300m² square quickly clean and usable for community gardening. Some collective meals and gardening workshops were organized. The second phase was the experimentation basic uses with the people by building a multi-purposed platform hosting different uses such as open-air kitchen, football, basketball, swing, cinema, etc. During a third phase, we organized an Olympic Games event in the neighborhood in order to communicate about this new available public space. We carried out sports competitions, made a film whose actors were inhabitants and continued the landscaping and the furniture on the site.

In order to make this space available, we used both temporary and permanent settings; on one hand, we constructed, solid street furniture hosting everyday-life-uses. On the other hand, we created an atmosphere going beyond the built object and this atmosphere is a pretext to activate people and to help them getting involved.

We can also consider availability, time wisely. We are sometimes mixing working time and living time, they tend to make one. Indeed most of the times, we live where our projects occur, in total field immersion.

For example, we are currently working on a project called Au Poil, in Châteldon, a small town in the middle of France, in Auvergne region. It’s a six months research-action for the P.N.R. Livradois Forez, a public regional institute. The aim is to formulate solutions for revitalizes the downtown village that suffers from a well-known downturn very common in European rural areas, mainly due to the lack of local businesses, the lack of suitable housing supply, the weakness of local economy, the changing lifestyles, etc. Our team is living and working there for six months in a former abandoned restaurant in the village. Our strategy is to gather a large amount of ideas coming from the inhabitants by meeting them in their everyday lives. Then we identify around 40 feasible micro-projects which deal with a wide range of fields such as real estate, public space, local economy, communication, etc. Finally we are demonstrating the feasibility of some of them by starting to implement them with the locals. Moreover we are writing in parallel a global strategy on a method that can be used in other similar villages.

The idea is to support the inhabitants and the public authorities, from the generation of ideas to their achievements. For example one of the micro-project aims at establishing a regular market in the town. Thus, we are organizing temporary market times and round tables on the main square in order to find suitable solutions among small traders in the village, some local producers and inhabitants. Another project concerns public space. How can we find solutions to make better public spaces, with low budget and involving the know-how of the locals? Thus, we organized a building site with the municipal technical department and inhabitants, and we experimented designing street furniture with second hand materials coming from a nearby company.

The interest of the research lies in the way those micro-projects are put together and how it describes a bottom-up strategy for the urban development of the village.

We want to stress here, how this project is based on a special time management. Indeed meeting people in their everyday life is very different from meeting them time to time. We are getting involved in the life of the village and getting friends with some people, although we maintain an impartial consciousness. What becomes interesting and somehow bewildering, is the combination between rational and rather exhaustive methods on one side and intuitions and improvisation on the other side. And perhaps availability lies in the amount of time booked for improvisation in a project schedule. It’s during that time that we are for example able to get friends with the music band of the village and get to know some crucial information about the history of the town, or that we are able to facilitate a meeting between a worker and someone repairing his home during an informal talk, or that we can meet a free time gardener at a party and make her interested in selling her vegetables at the market time, etc.

We are giving some of our own time to other, but when we work in a neighborhood with inhabitants, we are also counting on their availability, the amount of free time they are able to give to build a chair, to talk to another guy, to participate to a debate, or just to sit and watch. Actually we happen to work mostly with people that have free time or, more precisely, that have time that is not taken into account in usual urban planning and construction fields.

An available situation is also a moment of know-how transmission. Our projects are trying to set the tools for empowerment, to give the power to citizens to act on their own and to be able to enhance their environment. In that way, people can also be stronger in expressing themselves in front of public authorities and urban experts on subjects that concern their city. In one way, we are sharing with people about public decisions and city planning directions. And in the other way, we are starting from what the people are able to do, try to count on capabilities that are already there in order to make urban planners and public authorities take them into account in the construction of an urban area.

In our project Café sur place, in Bordeaux we worked for an inhabitants association that wanted to get involved in the construction of an existing neglected square. The site was included in a wide urban planning area but no operational decision concerning this 500 m² had been taken yet. The association had already done some events, decorations and plantings in their streets and they were about to open a self-restored bar facing that square.

We designed our project as a situation where there were multi-faceted capabilities exchanges. The constructed part of the project was composed of a multi-purpose terrace enhancing the future bar and modular street furniture that could host a wide range of uses. Some carpentry workshops were organized where anybody could help designing and building a part of the structure. There were also gardening, painting and sewing workshops organized on site with nearby schools, associations, social centers and passersby. Thus local know-hows were available on site, enhanced by cultural events on weekends. They were also debate times organized with the inhabitants and the public authorities.

The construction phase lasted two weeks and we managed to experiment how urban planning at small scale can be undertaken by well organized inhabitants and can be a starting point for greater urban purposes.

These three approaches of availability wanted to present a personality trait of our collective and a method of our work. (As we move forward in doing things and as we are somehow at a turning point of our carrier, it might be useful to keep our improvisation time and improve our open-mindedness.)

Besides, at a time where urban planning practices seem to be in crisis, it’s interesting to stop for a moment on those left behind spaces, under-estimated times, and forgotten know-hows in order to try to awaken our curiosity, our availability for them.