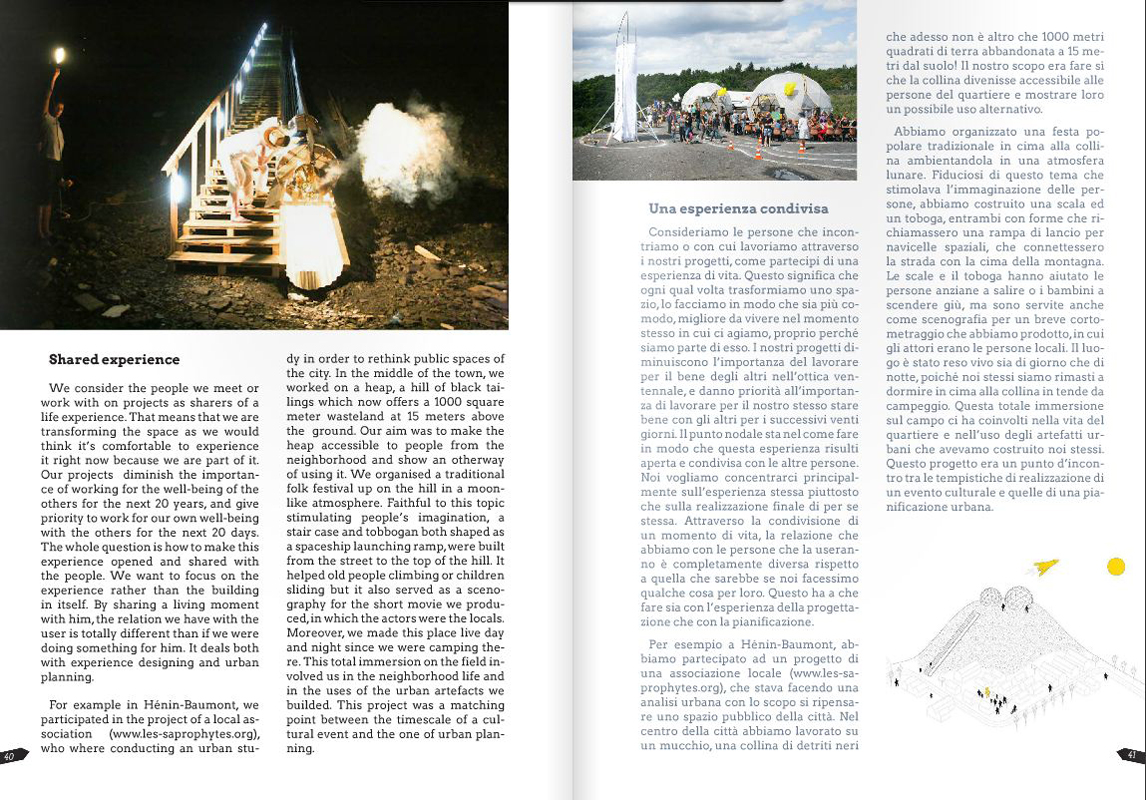 In order to enhance social grouping and strengthen links between local communities and public space, we include in our projects people that are direct users of the space. We try to build an involved and mutual relationship with them. This essay focuses on three main points that describe this relationship that stands for one of the main element of our actions. It’s about how we consider ourselves and the others.

We consider the people we meet or work with on projects as sharers of a life experience. That means that we are transforming the space as we would think it’s compfortable to experience it right now because we are part of it. Our projects diminish the importance of working for the well-being of the others for the next 20 years, and give priority to work for our own well-being with the others for the next 20 days. The whole question is how to make this experience opened and shared with the people. We want to focus on the experience rather than the building in itself. By sharing a living moment with him, the relation we have with the user is totally different than if we were doing something for him. It deals both with experience designing and urban planning.

For example in Hénin-Baumont, we participated in the project of a local association called Les Saprophytes, who where conducting an urban study in order to rethink public spaces of the city. In the middle of the town, we worked on a heap, a hill of black tailings which now offers a 1000 square meter wasteland at 15 meters above the ground. Our aim was to make the heap accessible to people from the neighborhood and show an otherway of using it. We organised a traditional folk festival up on the hill in a moon-like atmosphere. Faithful to this topic stimulating people’s imagination, a stair case and tobbogan both shaped as a spaceship launching ramp, were built from the street to the top of the hill. It helped old people climbing or children sliding but it also served as a scenography for the short movie we produced, in which the actors were the locals. Moreover, we made this place live day and night since we were camping there. This total immersion on the field involved us in the neighborhood life and in the uses of the urban artefacts we builded. This project was a matching point between the timescale of a cultural event and the one of urban planning.

In addition to implementing an atmosphere and sharing an experience of convivality, we also like to consider people we meet as producers and not just as users. That means we try to count on capabilities already there and include them in the design and the construction phase. As we told formerly how we try to get ourselves involved in designing an experience, we are now talking about getting the other people involved in the production of something.

For example, we worked for a local cultural association in an old district of Brest, called Vivre La Rue. They are used to organise music festivals and art exhibitions in old houses in rubble made of stones. We intervened in one of those houses and turned it into an open air theatre. It was a response to a specific need of these people. We strengthened the space where this local community was growing. The idea was to organise carpentry and painting workshops opened to public, in order to build a footbridge going through the first floor windows, some chairs, a new gravel ground and a stage. The association gathered some motivated workers but we were also helped by passersby. First, we designed in advance a general concept, the basic materials and the main technical points, in agrement with the association. Then we left space for improvisation depending on people and opportunities on the field.

We want our projects to be the continuity or the birth of self-managed urban situations. That is to say spaces that can be handled by local communities whose actions can go beyond their own interests and bring pertinent solutions for social, cultural and urban issues. Transmitting the management or continuing transformation enhance the link between those different communities. This philosophy of transmission is about confidence, pedagogy and research of self-reliance.

In Grenoble, we were invited by an association, Les Arpenteurs, who are developping participation processes and organising debates with the precarious to find collective solutions. They wanted to transform a former swimmingpool commercial hangar into a place of experimentation and DIY working, aiming at finding solutions for habitat. In collaboration with other local groups (Les 4 jeudis, l’ESCA, Craterre, Les Glaneurs du possible, Zoom) , we did the first transformation of the empty building during one week. The idea was to make the place quickly functionnal, good looking, and easy to re-arrange afterwards. In addition to the organisation of debates with different concerned people, we tried to set the tools that made easier later to build new ideas and pieces of furnitures. For example, we settled a recycling depot, gathering different second hand construction materials. We also hanged small labels on pieces of furnitures we made, indicating useful tips to reproduce them. In the same idea, another group drew on the ground and on the walls, basic measurements and some sections of tables and chairs at a one to one scale.

At the beginning, Les Arpenteurs carried out the project then we made it ours for one week. Now one of the group we invited is handling the place with Les Arpenteurs ; they are still working on making it helpful and opened to people interested in habitat and self-building.

In general, when we talk about getting closest to what people want or do, we are not aiming at exhaustivity, we are looking for some people with whom we get along. We think that as long as our actions are opened to everyone, we don’t mind having privileged relationships with a group of people and therefore enhance his personality and opinion in the public sphere. We don’t believe in anonymous public spaces made for everyone, we want communities with specific interests to seize them as long as they are opened and linked to others. The idea is to imagine a network of a multiplicity of those communities that stands as a counterweight facing state and market. 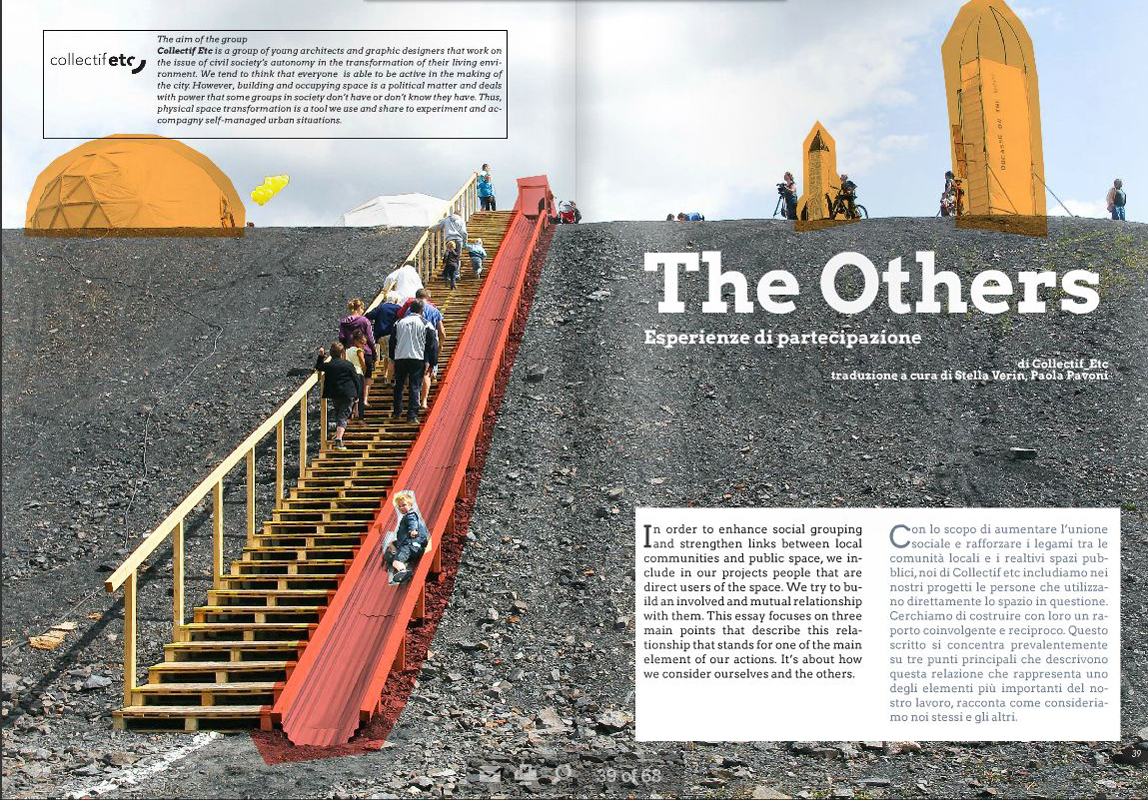 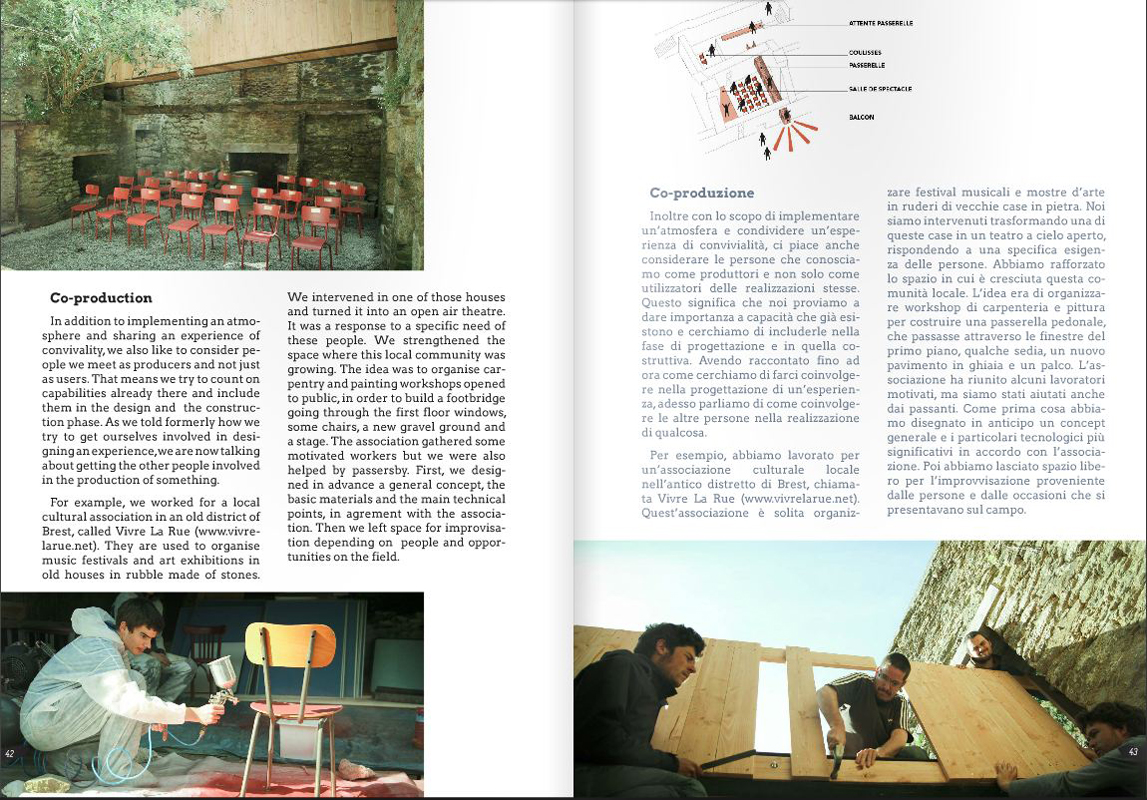 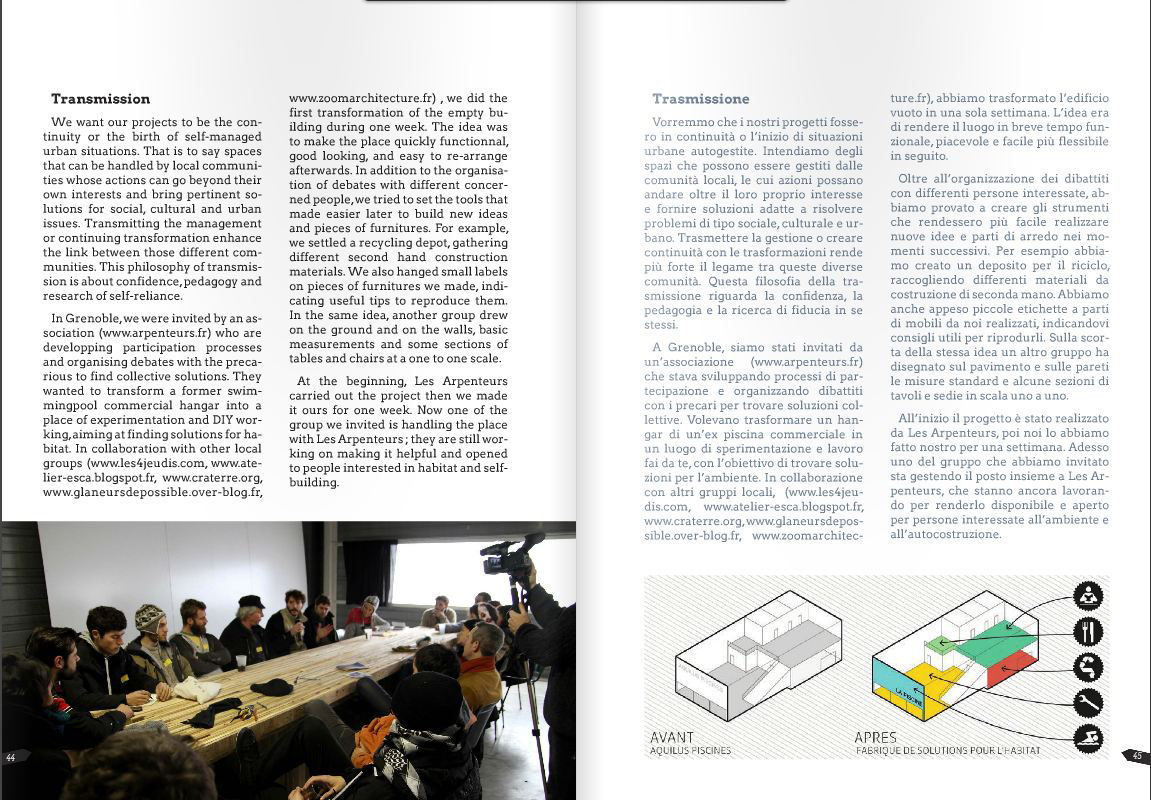 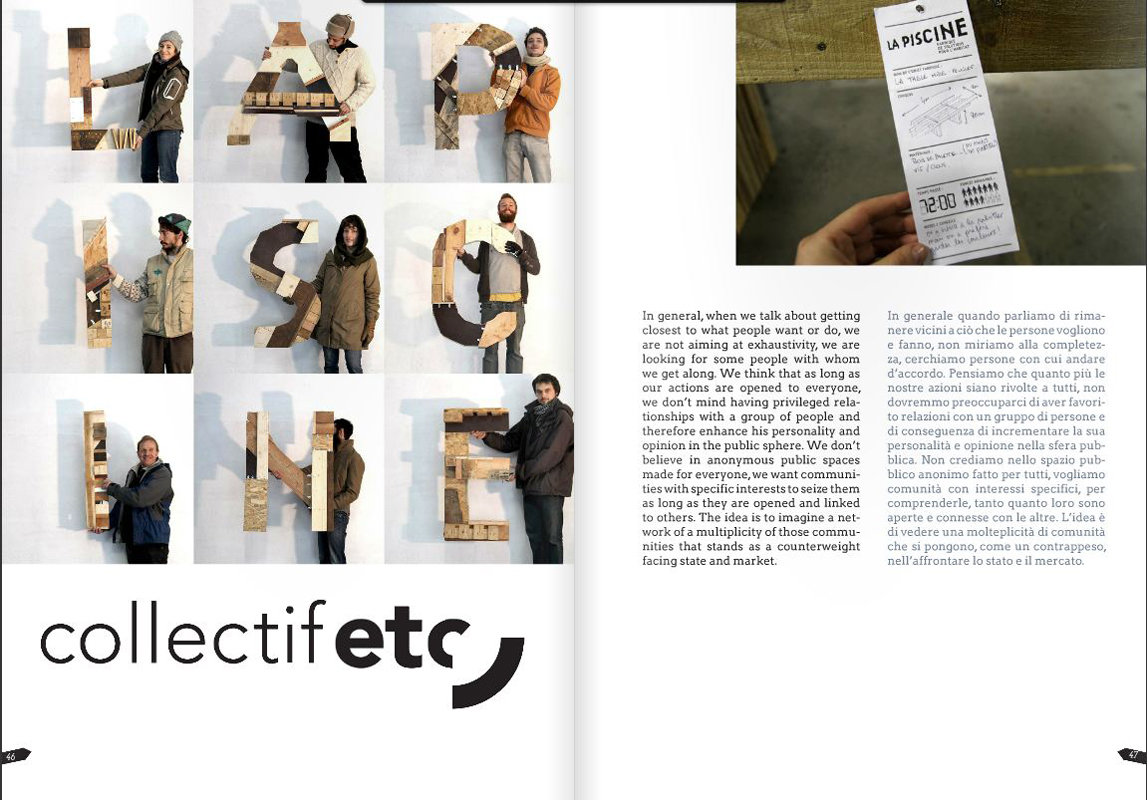